It Could Always Get Better 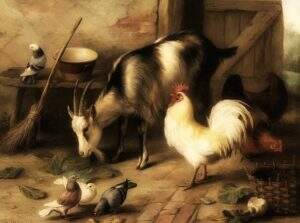 Lately I find myself frequently recalling a particular Jewish folk story.  It’s typically entitled something like “It Could Always Be Worse.”  In case you’re not familiar, here it is (with thanks to The Bonai Shalom website for sparing me rewriting it from memory):

A poor man lived with his wife and six children in a very small one-room house. They were always getting in each other’s way and there was so little space they could hardly breathe!  Finally the man could stand it no more. He talked to his wife and asked her what to do. “Go see the rabbi,” she told him, and after arguing a while, he went.

The rabbi greeted him and said, “I see something is troubling you. Whatever it is, you can tell me.”  And so the poor man told the rabbi how miserable things were at home with him, his wife, and the six children all eating and living and sleeping in one room. The poor man told the rabbi, “We’re even starting to yell and fight with each other. Life couldn’t be worse.”  The rabbi thought very deeply about the poor man’s problem. Then he said, “Do exactly as I tell you and things will get better. Do you promise?” “I promise,” the poor man said.

The rabbi then asked the poor man a strange question. “Do you own any animals?”  ”Yes,” he said. “I have one cow, one goat, and ten chickens.”  ”Good,” the rabbi said. “When you get home, take all the animals into your house to live with you.”  The poor man was astonished to hear this advice from the rabbi, but he had promised to do exactly what the rabbi said. So he went home and took all the farm animals into the tiny one-room house.

The next day the poor man ran back to see the rabbi. “What have you done to me, Rabbi?” he cried. “It’s awful. It’s gone from bad to worse – far worse. I did what you told me and the animals are all over the house! Rabbi, help me!”

The rabbi listened and said calmly, “Now go home and take the chickens back outside.”  The poor man did as the rabbi said, but hurried back again the next day. “The chickens are gone, but Rabbi, the goat!” he moaned. “The goat is smashing up all the furniture and eating everything in sight!”

The good rabbi said, “Go home and remove the goat and may God bless you.”  So the poor man went home and took the goat outside. But he ran back again to see the rabbi, crying and wailing. “What a nightmare you have brought to my house, Rabbi! With the cow it’s like living in a stable! Can human beings live with an animal like this?”

The rabbi said sweetly, “My friend, you are right. May God bless you. Go home now and take the cow out of your house.” And the poor man went quickly home and took the cow out of the house.

The next day he came running back to the rabbi again. “O Rabbi,” he said with a big smile on his face, “we have such a good life now. The animals are all out of the house. The house is so quiet and we’ve got room to spare! What a joy!”

Since the legal issues of my divorce were finally settled late last month, I feel like a cow, ten chickens, and a goat have moved out of my home. Now that I’m done dealing with the lawyers, the court system, the negotiations with my ex, and my internal voices of fear and worry, my previously perceived small home feels more than spacious.

We have such a good life now. My brain is quieter and roomier. Now, all I have to do is take care of my 20 clients, 3 team members, 2 children, the house and myself, all as a solo parent/entrepreneur.  Three-and-a-half years ago I seriously doubted I’d be able to handle all these responsibilities independently.  Yet by the grace of the Divine and some special humans (including but not limited to my children), we made it through all that and over the major hurdle of the looming trial. What a joy!

One way to interpret the folktale above is that life could always be worse – barn animals might move right into your home.  Today my personal and professional interpretation is actually the opposite – no matter how challenging life feels for you now – your life could miraculously become better.  Those barn animals you never thought would leave might actually go somewhere new to live.

This weekend I had the privilege of hearing Ann Mukherjee speak at the HBS Dynamic Women in Business conference.  She’s the SVP and Chief Marketing Officer for Frito-Lay North America who started out in a seemingly hopeless life situation, and as an adult she’s experienced many painful hurdles.  Now she’s a star, in every aspect – as an executive, a leader, a woman, a mother.  She emphasized that the key to getting through the hardest moments in her life was always to imagine her success.

My legal case was my personal flock of barn animals.  Right now, what’s taking up precious space in your home or head?  What miracle can you imagine?

Share it in the comments below and I’ll hold that image with you.  Or, if you’re having trouble even imagining your miracle, email and we’ll find it together.  Your small but seemingly expansive one-room home could be right around the corner.